So I’d love to share with you a sewing project I did for the one scene I am quite heavily involved in, which is STEAMPUNK!

As i looked up photos for this blog piece, I was horribly ashamed to notice that this outfit -which is the last one I sewed, was made 3.5 YEARS AGO. I genuinely can’t believe it’s been that long since I got behind a sewing machine. Good news is that we are fixing our spare room into a sewing room, so hopefully this will be rectified in the nearish future.

Anyway, I got into steampunk about 10 years ago courtesy of my boyfriends insistence on going to the first dedicated UK steampunk event ‘Asylum’ in Lincoln.  One of the first things my boyfriend did was enlist us on a corset making course in Rutland for my birthday. At that point I had not used a sewing machine on anything more complicated than upcycling old clothes and that was a long time ago. The course which was over 2 days was great but was also horrendously intimidating for a beginner and i did cry at one point. The good thing is my boyfriend came along , so I ended up with 2 corsets that fitted reasonably well.

The pattern for the blouse and the over skirt are both by American company Truly Victorian. I can highly recommend their patterns, many are simple and easy to follow. Their patterns are full scale and hand drafted to fit the modern body, using historical principles and techniques.

For this outfit, I decided to use TV301 1870s Tie Apron Overskirt, which is drafted based on an actual garment as seen in an 1872 pattern catalog. For the top I chose TV460 1885 Cuirass bodice with 3/4-length arm patterns. I already had a made an underskirt/bustle.

One of the issues with Victorian patterns is they quite often need a lot of material, but the great thing with the Tie Apron overskirt is that it doesn’t. It also is very easy to sew and packs away easily for travel. The top was more complicated to sew and we used 3/4-length sleeves with the low square neck, which is usually used for evening option. But we must remember that this is steampunk and not authentic Victorian re-enactment. One of the joys of steampunk is that pretty much anything goes!

I had already bought the material from one of our favourite companies Croft Mill for a reasonable price. It’s a light taffeta with a gorgeous tartan pattern of red, white and black.

So the apron I made first on my own as it was a simple pattern. I did decided to edge it which took time because I plumped for a pleated edging from the same material. I added on a nice vintage button and velvet ribbon to add some weight and detail to the bottom on the ties.

The bodice was more complicated and as I don’t have a dressmakers form,  I enlisted the help of a local steampunk friend Sara to help guide me and help fit the bodice properly.

Sara is a talented seamstress and she encouraged me to simplify the process,. This was because even though we wanted to make something that looked good-because it’s for personal use and not every day use -we decided there wasn’t much point to adding in the complicated boning-especially as it would be worn over a corset anyway. The other decision we made was to use hooks and eyes rather than adding buttons . This decision was partly because sewing in button holes takes a fair more time. Also as the pattern is quite busy I felt buttons weren’t necessary to add as a feature to the top.

It took about 6 hours to make the top because of fitting and pattern matching , but we did a good job. Sara really just helped oversee my progress and gee me on when I was feeling un-confident or unsure about what I was doing. Sewing, is like anything, practice makes perfect!

Details I added afterwards was a black velvet ribbon to the edge of the bodice. It helps give the edges more strength ,aswell and look pretty . Victorian styles tend to be more flouncier, but again this was for steampunk and I personally don’t like too much frou-frou.

So i had my outfit made out of material I liked and patterns I liked. But how to turn it into a steampunk outfit?

Well the previous year i had bought a patch from a stall at a steampunk event in Frome from The Ministry of Feline Overlords. I loved the concept of cats secretly planning world domination by being cute.  Also helpfully the colours matched my material. I had also not long after picked up an electronic cat from a carboot sale. So the concept of being a handler for one of MFO’s agents came into being. I dressed Sir Henry (the cat!) up in a fancy cravat and placed him in a basket ,with cat snacks and a brush, so he was easy to carry around. The patch I attached to a hat I already owned, and sewed a nice bit of lace edging to it so it would stand out more against the black background. And hey presto! Omnes Adorate Kitteh! 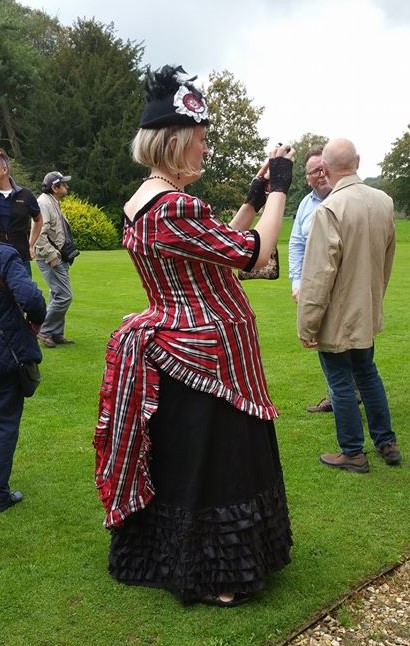 Crazy cat and Armitage lady View all posts by Rachel